We had over 20 people participate in the creative workshop breaks over the month and everyone seemed to enjoy them very much. 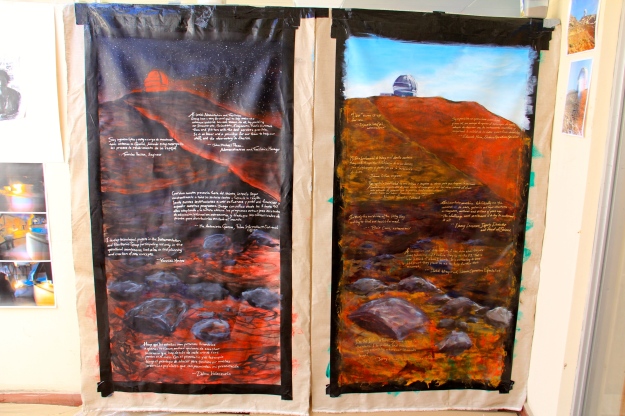 Two Mountains of Knowledge paintings with quotes from the Gemini staff 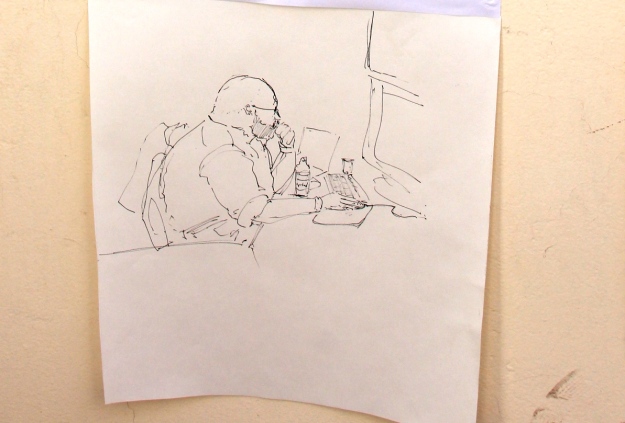 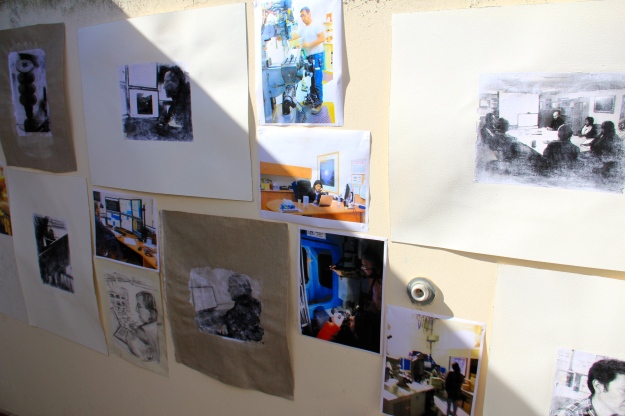 One wall of my art at the show

photo safari at night at the telescope 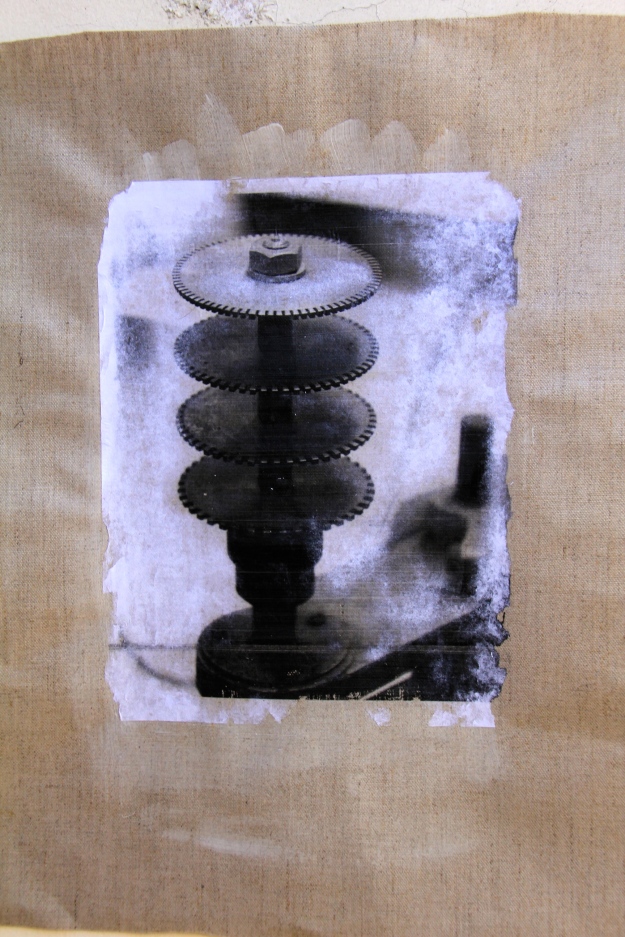 Last Saturday and Sunday I curated and installed art work from the Gemini Staff creative break workshops as well as my own work-in-progress. Their work was displayed in the conference area of Casa Ocho and my own work was in the two room studio area, also in Casa Ocho.

On Monday after work, we had an opening party and over fifty people showed up to have a look and a glass of excellent Chilean wine and some nibbles. It was great fun and everyone had a good look at my work-in-progress and their own work as well as the work of their colleagues. My portraits of the people who work at Gemini were of great interest, as were the photo essays on Padre Picetti and the sketches from my being up at the telescope overnight with the astronomer and special operations team.

The person who embraced the sho-do instruction most closely in a very ‘zen’ meditative fashion was David Krogsrud. He produced a piece of work which everyone coveted — ‘Outer Space’ is worthy of special mention. Djazi Ladjal’s and Blair Conn’s cyanotype prints were also strong and striking. Because they used small idiosyncratic items, the prints are very specific to them and their lives. Joanna Oslip did the same, with her collection of personal jewellery.

One of my favourite stories of the creative break workshops is that of Ma.Antonietta Garcia, who works in Outreach. She was shamed as a small child by a monstrous art teacher who would line up all the children’s work from ‘best’ to ‘worst’ and poor Tonia would always come in near the end of ‘worst’. This experience had marked her but she was able to overcome this emotional block to create some absolutely exquisite sho-do and sumi-e paintings, which were featured in the exhibition.

It has been a riotous month — from the first week’s honouring of Padre Picetti and everything he has done for Chilean astronomy education, the Mr. Toad’s wild ride of the Rosetta comet project’s successful landing of a spacecraft on a comet, the thrills of watching science being done in the moment overnight at the observatory and the quiet moments watching the sun go down over Coquimbo Bay, while sipping on a Pisco Sour. A truly rich look at the scientific community of Gemini Observatory.

We had Deputy Director of Gemini, Nancy Levenson, astronomers Blair Conn and Djazia Ladjal, Ken Anderson and me take a half hour out of the morning’s work to create five art books of a 360 degree view

from the back garden of Casa Ocho. The view is divided into five pie-like segments and a person with an accordion blank book, twig and small pot of ink stands in each of the segments. The twig releases everyone from trying to be accurate or too much in control. For five minutes, each of us drew what we could see from our segment. Then, after sprinkling sand on the wet ink of our drawings, we closed our books and passed the books to our left and our bodies to the right. In this manner, all five segments were drawn, by all five artists, in five minutes at a time. After about half an hour, we had all five books full of art by all of us. The results look like ancient Japanese scrolls. We will be displaying them at the exhibition on Monday.

So today is the last day for active studio time here at Gemini. I have a 360 degree landscape exercise later this morning, which will involve some astronomers as well as the deputy director, Nancy Levenson. It is overcast but we still have a chance of making some decent work. If all goes well, you will see some of the photos of the event here on the blog.

This weekend I will work on getting some of my own work in progress as well as finished work by Gemini employees up onto the walls of my studio as well as the general conference room of Casa Ocho. We have work from engineers, astronomers, public relations workers and children of employees. We are hoping to have a little ‘opening party’ at 6:30 PM on Monday evening to celebrate the residency and all the artwork from everyone. I will photo document the event and post some of the pictures on this blog.

Although I have now been back at almost sea level in La Serena for a week, in my dreams I see the summit, the telescope. It is sort of like being in a James Bond movie when you first get a look at the inner workings of a telescope and then when you witness the teams who use this instrumentation to push our knowledge of the furthest reaches of the universe, well, it is amazing and inspiring.

Today I continue with creative break workshops for astronomers, outreach workers and engineers. I hope to get my portrait series completed today and use my final day in the studio, tomorrow, as a completion day for as many projects as possible.

Gemini Telescope getting ready for the night’s observations 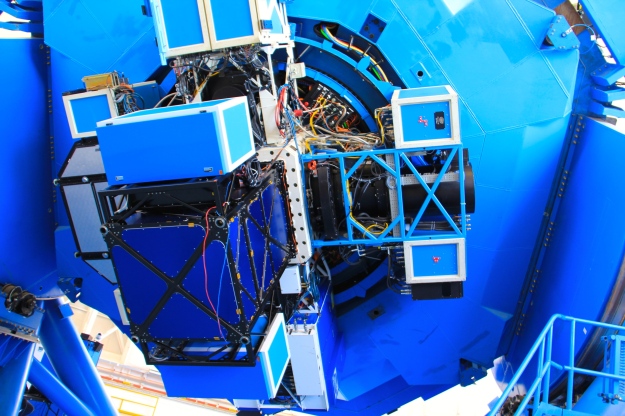 Inner workings and instrumentation attached to the telescope

Hard to believe that it is only a week until I leave — the time has flown! It is another cloudy, cool morning — there are a lot of those during this season in Chile. I bundle up in turtle neck and puffy vest and feel like an idiot by noon when it is hot and sunny — adjustable layers are what is needed. 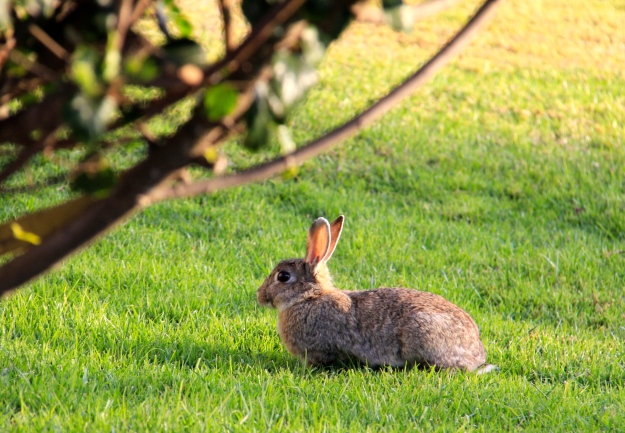 I continue to gather visual notes via the camera and sketch and paint. More people are showing up for creative break workshops and enjoying the process. Most people are interested in sumi-e and sho-do but there are also texture mappers and a team of five who want to try the 360 degree landscape exercise. We are anticipating having an exhibition from next Monday to Wednesday (Dec. 1-3/14) of my work in progress as well as some of the work from people who participated in creative breaks. 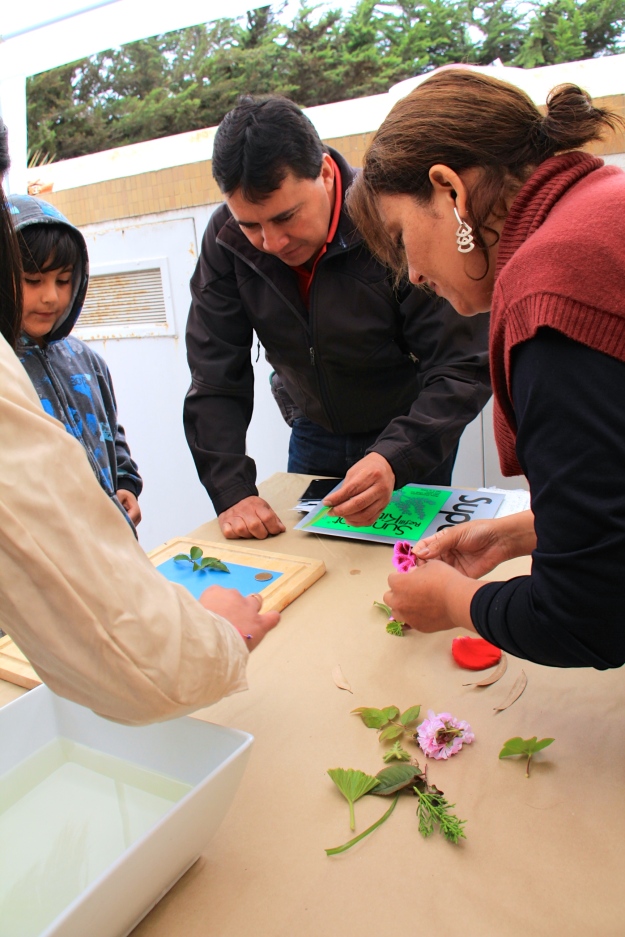 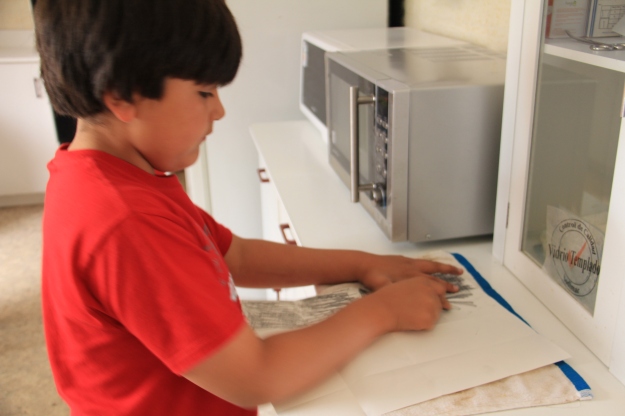 I haven’t taught very much in life and now find myself in the position of teaching creative techniques to scientists and engineers. I felt strongly at the start of this residency that I didn’t want to just come, experience and make my own art but rather have a dialogue between art and science with the people who work here.

A couple of days back, on Saturday, we had a ‘family creative break’ where spouses and relatives of people who work at Gemini came by to try out some of the exercises. My translator didn’t show up for the first hour and so I just winged it in my beginner Spanish. I had excellent scripts which a native Mexican friend in Vancouver had helped me prepare (thank you Melania!), so although it was a bit ponderous to read from the scripts, everyone told me that everything was ‘claro’ or clear.

We started with cyanotype printing — using the largest star in our own solar system to make art. I asked everyone to bring small, flat personal items which worked well in the prints. (Engineers have an edge on this one as most of them are walking around with tiny wrenches in their pockets or bits of wire or other interesting tools.)

The children, as children will do, just waded in and tried things — as a child, that is pretty much your modus operandi — learning new stuff all the time. The adults were more tentative but as the afternoon wore on, everyone tackled one or more of the four exercises on offer — sumi-e, which is Japanese calligraphy — we created visual poems using the Japanese characters for stars, astronomy, outer space, planets and other Gemini-themed ideas. Shodo– the ‘way of writing’ is actually a martial art practised competitively in Japan between rival monasteries in the Kyoto area. It requires the participant to adopt an uncomfortable bent-kneed position over a large swath of paper, a large broom is dipped into a bucket of ink and the shodo-iste must paint their large Japanese characters on the paper, walking backwards. Although it takes years of work to become good, even a beginner can achieve some interesting effects and well, heck, it is just fun to slosh around a gallon of ink in a bucket with
a broom!

The fourth exercise was texture mapping of an environment — which doesn’t sound inspiring but is actually rather fun. The artist takes a piece of paper which has been divided by folding into about sixteen rectangles. They then take soft graphite and rub each small rectangle against a different texture in the room. In this manner, they map the entire environment via textures only. The result is a lovely, silvery abstraction of a large piece of paper covered with rectangles of different textures rendered in graphite.

This is my final week of active art-making and I am hoping to get most of my projects at least to the point I can finish them off at home, so vamos, vamos! [/caption] 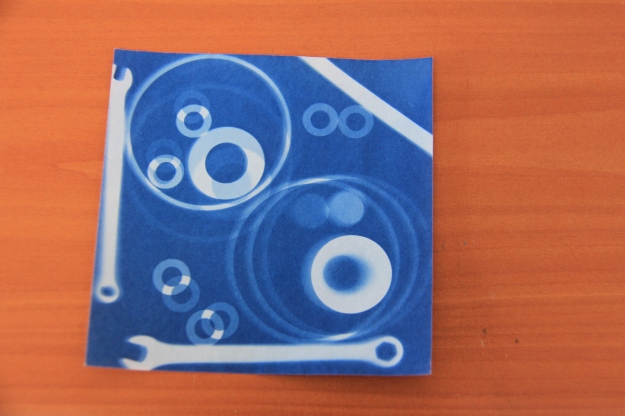 Land-based telescopes are in the challenging position of justifying their existences. As soon as a really huge, powerful telescope is built, something else is about to overtake it technically. The science pushes instrumentation forward and smaller, earlier telescopes must give way to their progeny. Clever telescope management looks ahead as to ways and means of applying different instruments onto the original telescope in order to help it keep pace with innovations.

Eduardo Marin, Science Operation Specialist, with a background in operations as well as astronomy, is uniquely qualified to speculate on future directions. “A lot of the smaller, early telescopes are going robotic. They will be controlled remotely.”

This is my final day at the summit of Cerro Pachon — I return today to Gemini’s office complex in La Serena. After five days at altitude I am both grateful at the unprecedented access to the telescope itself and the gracious astronomers who invited me into their world and also happy to be heading back down to a place with more oxygen for my brain! 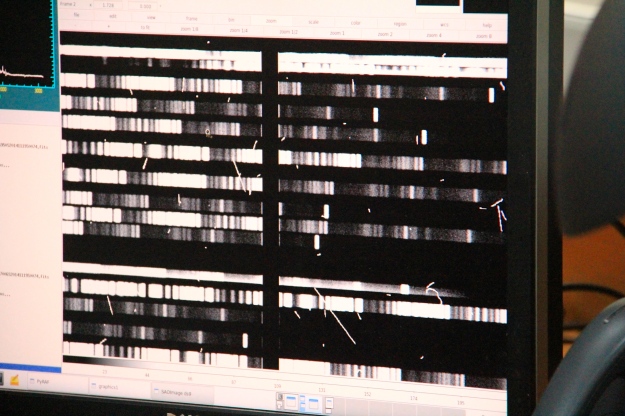 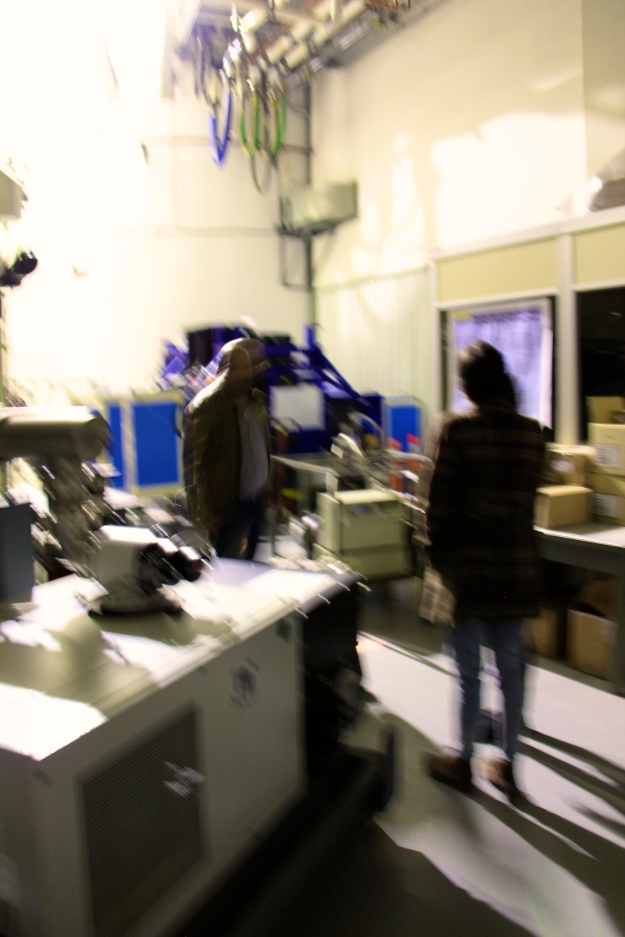 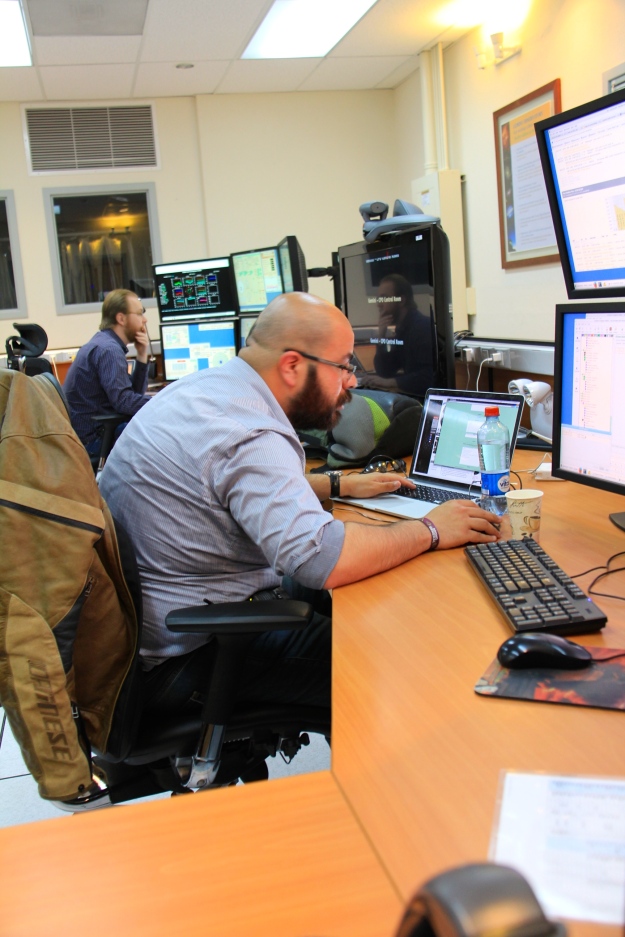 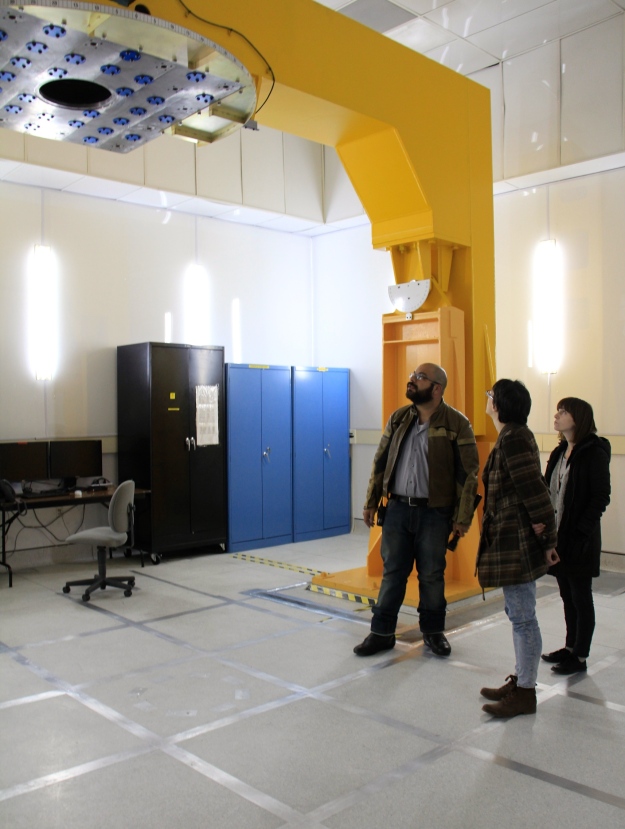 Gemini chief astronomer for the evening, Eduardo Marin, took a break from the evening’s frustrating weather (clouds) to give the visiting astronomers and me a tour of the telescope. What a tour! Although I had been trotted through the facility and given a perfectly decent tour last Monday by Outreach worker, Manuel Parades, this was a tour in a million. Eduardo knows every screw on every instrument on each of the four floors of the complex. Even the shipping department is fascinating. There are hoists and machines for getting the mirror down to its re coating tank for some fresh silver and other compounds and hoisting it back up to the telescope and these are mighty. The back up power system is ready for the power cuts that happen during winter storms. Glycol for basic chilling of things and helium for others — the chemistry, electrical parts and the mechanical elements are all complex and beautiful. The engines to move the tons of engineering which constitute the telescope are fairly modest because the whole thing is resting on a bed of oil, so there is very little friction. Because this night the telescope was still struggling to obtain some data, a lot of the tour was in the dark with flashlights because no light must get in the way of the telescope. So the overall impression was that we were a small band of people trailing around with flashlights and probing this temple devoted to outer space. Sort of like a Grimm’s fairytale, with Gothic lighting.